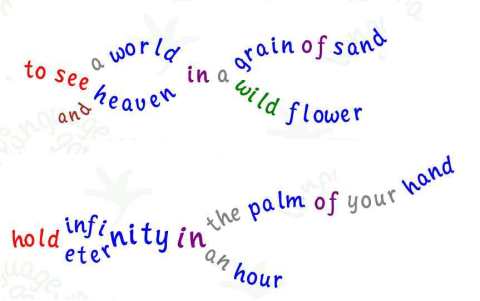 “To see a world in a grain of sand,
and heaven in a wild flower,
Hold infinity in the palm of your hand,
and eternity in an hour.”
William Blake

I remember when I was young, play tig in the playground at school, I don’t know what you call it, it would be nice to find out, just the game where you’re “on” and you chase after the others till you catch one, then they’re on, and they chase after you, ahh, happy days, once while playing this I remember getting sucked into a vortex of infinity.

I was running away, towards and then behind the toilet block. Hidden from view, I could carry on running all the way round, hoping to outrun my chaser, but I realised the chaser could be clever, and veer off to the left to head me off at the other side as I reappeared, literally running into his arms and being caught. You know the situation, I’m sure. So you stop, don’t you, and double back. But they can be smart too, knowing you’ll do this, so they carry on in the original direction. So you better carry on too. Only they’ll work this out, and head you off. In another universe, I’m still stuck there, not knowing which way to run.

The science of trying to work out what your opponent will do in such situations, or “games”, and then using this knowledge to influence your own behaviour, is called Game Theory. It’s not just concerned with trivialities. Far from it; in fact, its theories are applied across all human endeavours. The nuclear arms race between the US and USSR was one such game where each kept on building up their arsenals far beyond the point of oblivion. Such colossal spending trying to keep up was a major factor in the collapse of communism.

In ELT, publishers operate in much the same way, grafting on every conceivable feature to their new coursebook, such that they have workbooks and ebooks and websites and cds and dvds. Teachers can get sucked into the game inadvertently, judging the quality of a resource simply by how many shopping trolleys they need to get between classrooms.

Scott says “Stop! Stop playing this foolish game.” The only winners are the arms manufacturers. In a recent post of his, F is for Fractal, we see the possibilities and joys of working with and exploring a short text.

Of course, if we are going to limit the amount of materials we use in class, the impact and resourcefulness of the ones we do choose should shine brightly.

That’s what Language Garden is committed to doing at www.languagegarden.com 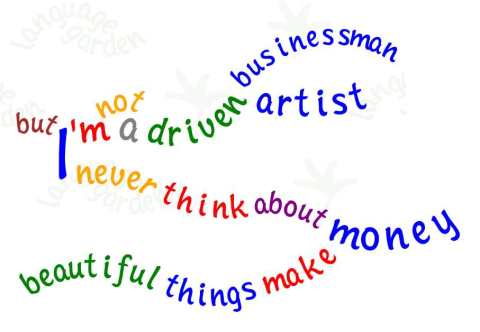 “I’m not a driven businessman,
but a driven artist.
I never think about money.
Beautiful things make money.”
Lord Acton

My diary shows two Skype sessions booked for today. I’ve just had the first, with a lovely chap called Nick Robinson. If you’re a budding author in search of a publisher, his fantastic website can help.

I met Nick last year at IATEFL, when I introduced him to the organic materials growing at the Language Garden stand. Then, a month or so ago, he connected with me on LinkedIn, although he didn’t remember me. My name came up as a suggestion and he invited me. The fact that he couldn’t place my name or face didn’t keep me awake at night.

But when I gave him the link to language garden, the memories came flooding back and he was more than pleased to talk. If he hadn’t remembered language plants, that certainly would have kept me awake. But of course, language plants are memorable. A chunk of linear text doesn’t leave a lasting impression, whereas a picture speaks a thousand words, and a picture made with words, how many does that speak? They certainly get learners talking.

And teachers. All the time, teachers tell me how they’ve told colleagues about language garden. They share their stories about their classes with strangers next to them in seminars, letting them know about the resource which so many of their learners love. It’s wonderful to hear, and if you have done this, I thank you sincerely.

But perhaps you’d like more than just thanks. Well, the Language Garden distribution system is now operational, a system that allows anyone – teachers, learners, school owners, publishers and resellers (and I’m working with all) to earn from spreading the word.

It’s simple. Once you’re set up as a distributor, you just make yourself a promotion code and let those you come across know. If they buy, you earn from the sale.

My second Skype meeting later this evening is with just one such teacher. She attends conferences, and gives talks and presentations, much like many of you, and is pleased to associate herself with Language Garden following the successes she has had with her own learners.

So if this speaks to you, please watch the 8 minute video below. Maybe then DM me on twitter @DavidWarr, and we can arrange a meeting on Skype 🙂

You are currently viewing the archives for May, 2012 at language garden.