“What has been will be again,
what has been done will be done again;
there is nothing new under the sun.”
Ecclesiastes 1:9

Scott’s recent post was about ideas and whence they came. There are some very interesting comments, and Sharon at English learning in Our World takes up the mantle in her blog too.

Have you ever done a crossword, or got your learners to make one in class? They get easier, the more answers you get, don’t they, as each new word provides a bit more help for the next, what with sharing letters as they do.

Word searches are the same, but have been stuffed full of distracters.

Have you ever used ditto marks? Boy, they can save time, can’t they? If only my teachers at school had allowed them when I was given lines. That would have knocked a couple of hours off.

Have you ever seen those pictures children make with words, like a snail’s shell with words curled round and round and a thin slither sticking out for its body? What are their names again?

Grammar boxes. You know them, don’t you, they’re in your coursebook, at the back, in no man’s land. It seems publishers can’t bring themselves to leave them out but equally feel they’re too grammary for the main section. If only there were something less rigid, less formal, more flexible and fun.

Collocation boxes are the same, just not so big. Collocation. What a word! I advise teachers when I demonstrate Language Garden, if there’s one word to have in mind when you’re teaching, this is the one. You’ll never be stuck again. Lessons will fly by. Don’t just let your learners compile lists of unrelated words. Get them to use them in context, with co-text.

Make your own collocation box here!

I want to put the words where I want!

Have you ever made a Mind Map ©? It’s a trademarked term, by Tony Buzan. I think I’m right in saying you can call these types of materials mental maps or concept maps, spider maps or word webs. Some say they’re all different. I’m looking over my shoulder as I write and answering the door to no-one.

As it happens, to find out whether a language plant was legally different from a Mind Map ©, I corresponded with the Mind Map people when I came up with the idea of language plants. It is. I say “came up with”. I just drew a mind map without the lines, and then started sharing letters like crosswords, and bent the words like snail pictures, so they all fitted together neatly like a tree, rather than a series of planks, or like the boxes that are put round words and hidden at the back of coursebooks.

After all, don’t they say, think outside the box? Fiona at fionaljblog has!

Do what Fiona’s done here (if she’ll allow you) 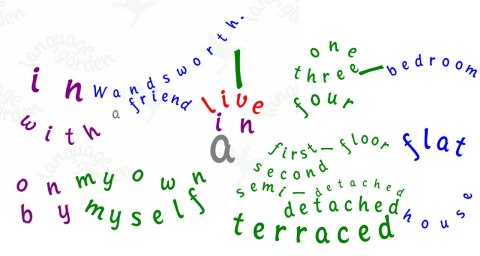 You are currently reading Boxes at language garden.