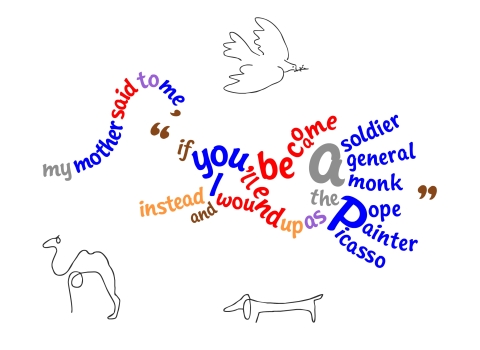 “My mother said to me,
“if you become a soldier, you’ll be a general,
if you become a monk, you’ll end up as the Pope.”
Instead I became a painter, and wound up as Picasso.”
Pablo Picasso

My middle name was originally going to be Llewellyn, a strongly Welsh name starting with a voiceless /l/, like saying “hl”, but because I looked so much like my dad, I was named after him instead: Colin.

It’s such a simple activity, this one, from Teaching Unplugged, “How I got my name”, and which was mentioned by Anthony and Izzy at the IATEFL Sig in 2010. Their presentation was about Teacher Training Unplugged, and I found it first rate. I rather belatedly came to it via Luke, after following the debate on A-Z of ELT on PPP.

My initial ELT training, a distance learning course without any contact hours, meant that my first ever real-life lesson to a class of teenagers in a secondary school in a sleepy town in Hungary not long after the fall of communism was actually the first time I’d put theory into practice. This horrifying episode is greatly offset by my never being moulded into a PPPer. I carved out my own style by doing what I felt most comfortable with.

It seems the overriding weakness of PPP is the pre-plannedness of it all. Comments did conclude that PPP moments can occur in a dogme lesson, bite-sized chunks measured in minutes rather than hours. Likewise, PPP can encompass dogma moments. But on the whole, I would say that the two are essentially at odds with one other.

Shelly recently elaborated how she prepares for a talk, relentlessly rehearsing, reviewing, refining, repeating, imagining, daydreaming, thinking what questions might be asked, determining what could go wrong, all in her head, so that when she’s there for real, it’s a doddle. Fail to prepare; prepare to fail, I think she would propound.

Half of me being of Welsh stock had its advantages growing up in the 70s. Those were the heady days of the likes of Gareth Edwards, the Welsh wizards of the rugby field.

Dogme teaching is all about doing it on the hoof, winging it, making it up as you go along. Well, let me restate that. Dogme teaching is about being able to do those things. They take great skill, the ability that experts have at making it seem so easy. The Welsh greats did this in my favourite sporting moment. It’s perfectly executed, second nature, inspired, inspiring rugby, unplugged.

You are currently reading Rugby Unplugged at language garden.