I forget how many times he punched me, this kid, three or four I reckon, shots to the midriff, such was his anger towards me at that moment. Hatred, helplessness, desperation, I’d been grinding him and his fellow citizens into the dust, and it all became just too much; he jumped out of his seat right beside me and retaliated. “Get back” I bellowed, “get off me, you wretch, you disgusting peasant, get off me or else I’ll sling you in prison, and cut off your head, and burn down your house, and kill your wife and children”. It was fun being the evil baron, and fortunately, for him as much as me I think, for his class teacher was watching on in mild shock, this 10-year old’s boxing technique was woeful. As his fist flew forward, it threw the rest of him backwards, the power dissipated into powder puff and the contact was as pathetic as a kitten’s.

Have you seen Ania’s post on role play? It’s great.

We’d been working with the language plant “Freedom” and I’d been letting them know in no uncertain terms that their welfare, the fact that they and their families were starving and their homes rat-infested meant nothing to me. I wiped their misery off my garments. They had to pay their taxes, or else horrific repercussions would follow. I had an army to support my terror and back up my threats.

The quote and language plant at the top is by Soren Kierkegaard, a Danish philosopher, 1813–1855. We’ve looked before at this rhetorical technique, that of using opposites: tyrant – martyr; over – begins.

I was crunching on carrots last time, an underhand, underground path of coercion. This time, we’ll look at its more foreboding accomplice: the stick.

Actually, the real experiment was conducted some weeks later, when the authoritarian had long since disappeared, nowhere to be seen, a distant memory. But the toys were remembered with delight when they were handed out again.

Those who had been threatened, the ones who had never owned, or personalised or internalised the reason not to play with the train set but were merely obeying orders, they applied logic: “if I catch you…”, it went. Well, he couldn’t could he, he wasn’t there, haha, thought you could force me to do what you want, did you? and pretty much all of them played with the train set.

It was the other group that the social scientist was most interested in. What would they do?

I know it wasn’t 100%, two-thirds, I seem to remember, who resisted the chuff chuffing and the clickety clicks in favour of what they considered the more constructive activity.

Going back to the Freedom lesson, we did some interactive activities like Puzzle, please have a go, then Comprehension, which has some standard type retrieval, inferral and grammatical questions. They soon became a bit fidgety and I called a halt to proceedings, the fearful tyrant replaced by a benevolent supporter. “What would you prefer to do instead?” I enquired. After the hopeful cries of X-box, or whatever they’re called, had died down, well, suppressed, I admit, they came up with writing their own play scripts for various characters in the story. The results? Amazing. Superb. Brilliant. “Avert your eyes. Poverty should never look at Power!” I remember in particular. Inner-city, under-achieving kids. Not in that lesson, I can tell you.

“To fight for her people,
to give hope to her fellow citizens,
she rode on horseback through the streets.

To visit the baron, their landlord,
to talk to him;
to demand freedom,
freedom from oppression,
from poverty, from tyranny,
through the streets, on horseback, she rode.”

*in a Birmingham accent, “surprise” would sound more like “surproise”, rhyming with “noise”.

The language plant is from the poem “If”, by Rudyard Kipling. It employs a great rhetorical technique, the Puzzle-Solution. For thirty of the thirty-two lines, he sets up the puzzle.

If you can do all this, then – finally the solution is revealed –

“Draw a picture, my little friends”, the primary-aged kiddies are asked, and of course they willingly oblige. “What lovely pictures, aren’t they nice!” Praise is lavished upon them where it’s due. But then, inconspicuously, insidiously, one group is rewarded with stickers, was it? gold stars perhaps, something like that, and they wear them with pride: What a good little girl I am; my masterpiece has been rightly recognised and justly rewarded. And everything seems fine.

But it’s what happens the next time that the effects start to become apparent. Oh no, for the rewarded group, their love of drawing a triangular mummy and skinny stick daddy next to a lollypop tree with a smiley sun shining down, this innocent expression is lost, at the very least watered down, replaced with a desire to gain a sparkly little star, or a house-point, a 7-year old’s substitute for money and fame and other corruptions of the soul.

It makes perfect sense though, doesn’t it? At first, it seems harmless enough, but look around, its big brother is everywhere. If you want to confirm something is a chore, reward its accomplishment. To signpost drudgery, sugarcoat it. In ELT, I see this time and again, especially in online materials fully able to incorporate technological bells and whistles. “Answer these questions and race to the moon” is what they hail with glee. “Our questions are so boring, we’ve packaged them up into a race to the moon” is what I hear with disdain.

I’m not some cantankerous sourpuss. I love sport and games. One of my favourite sporting quotes is by an Irish rugby player, Willie John McBride who said “it matters who is going to win; it doesn’t matter who won”. Play the game, play to win, else it makes a mockery of competition. Then enjoy the camaraderie afterwards. Nevertheless, in the classroom, I do feel that when the winning and losing of a game itself becomes the overwhelming focus, and language, or knowledge is merely an irritating obstacle to negotiate with minimal discomfort, the monster we see before us is of our own making. They of course get the blame for having such short attention spans.

The school assembly went well, by the way. I hung the sentiments onto the Walk beside me poem. I let them know about the greater influence intrinsic motivation has on learning, and how the poem can be a metaphor for everyone learning together, including the teacher. We learned some French too. “Who likes poetry?” I threw out to them. “Who likes French poetry?” I goaded. But I think they did. The coral responses suggested so.

“Well, that certainly wasn’t like a normal assembly” said the teacher afterwards. “I should hope not,” I thought. 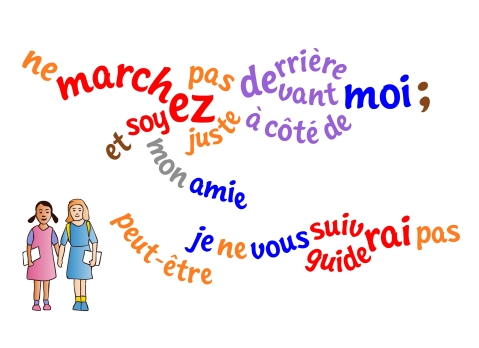 You are currently viewing the archives for December, 2010 at language garden.